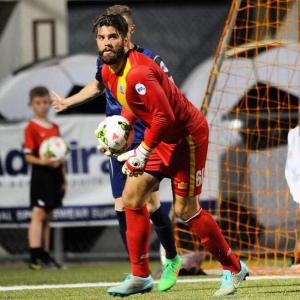 Welcome to Someday, where we interview interesting people from around the world to learn about how they make a living.  We call it Someday because one day our curious kids may elect to pursue a career in one of these fields.  In the upcoming months, we’ll learn: How to become a Clown, the best thing about being an Artist and the most challenging thing about being a Orthopedic Surgeon.  Who knows…we might even talk a little ice cream as well.  We hope you enjoy!

In episode #14, we sat down with Cody Laurendi.  Cody is a Professional Soccer Player and Goalie for the Austin Aztecs.  He attended Eau Gallie High School in Melbourne where he lettered in both soccer and in football, as a kicker.  Laurendi went on to play college soccer at South Georgia College and then attended the Heidelberg Academic and Soccer Academy (HASA) in Liege, Belgium where he played as a non-paid amateur for the fourth division R.R.F.C. Montegnee.  Cody returned to Florida in 2010 and was subsequently signed by the Puerto Rico Islanders.  On March 25, 2013 the Fort Lauderdale Strikers announced that Laurendi had signed with the club.  In January 2014, he was signed to the LA Galaxy II or ‘Los Dos’ as the fans call the team.  After the end of the 2014 USL Pro season, he signed with the Austin Aztex as they entered their first season as a United Soccer Leagues professional side.

Cody encourages anyone interested in pursuing a career in soccer to check out the U.S. Soccer YouTube page.