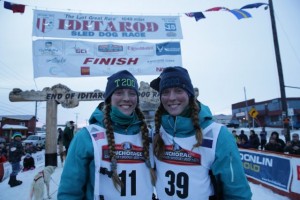 Welcome to Someday, where we interview interesting people from around the world to learn about how they make a living.  We call it Someday because one day our curious kids may elect to pursue a career in one of these fields.  In the upcoming months, we’ll learn: How to become an Artist, the best thing about being a Sushi Chef and the most challenging thing about being an Orthopedic Surgeon.  Who knows…we might even talk a little ice cream as well.  We hope you enjoy!

In episode #17, we sat down Kristy and Anna Berington.  Kristy and Anna are Mushers and have completed a total of 10 Iditarod sled dog races across Alaska.  Originally from Port Wing, WI, the twins began experimenting with sled dog racing at an early age by using “a set of skis, a milk crate, and a slightly perplexed dog team made up of a Border Collie and a Great Pyrenees.”  From there, they began spending more time working and training with dogs and completed several sprint races with 3-4 dog teams.  After completing stints in the National Guard, college and a dog sled touring business in Lake Tahoe, they pursued their love of the outdoors by moving to Alaska’s Kenai peninsula. Today, they are both residents of Alaska and have worked with several Iditraod veterans as they continue to hone their craft.  They are both currently planning to compete in the 2016 Iditarod.

Some additional resources you might find interesting are as follows: