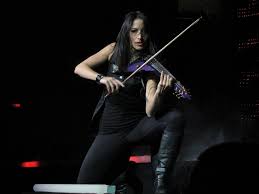 Welcome to Someday, where we interview interesting people from around the world to learn about how they make a living.  We call it Someday because one day our creative kids may elect to pursue a career in one of these fields.  In the upcoming months, we’ll learn: How to become a Philanthropist, the best thing about being a Sushi Chef and the most challenging thing about being a Mountain Climber.  Who knows…we might even talk a little ice cream as well.  We hope you enjoy!

In Episode #30, we sat down with Violinist, Asha Mevlana.  Asha is known for playing an electric 7-string viper violin and for performing with the Trans-Siberian Orchestra. She has released two albums with the string quartet Invert and one with the Australian rock band Porcelain.  She has also performed with artists such as Alanis Morissette, Enrique Iglesias, Roger Daltrey, Dee Snider and the Jonas Brothers and her TV appearances include The Tonight Show with Jay Leno, The Ellen DeGeneres Show, Jimmy Kimmel Live, the Grammy Awards, the MTV Movie Awards and American Idol.

You can learn more about Asha here.