Dear America: It’s time to up our entrepreneurial game 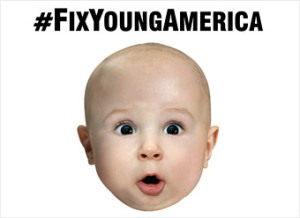 This is a re-post of a great article from fortune.cnn.com (the original can be found here). I typically prefer to provide my own content for most posts but found this article to be very much in-line with some of the things we’ve discussed here at Shafer…Power!  The only commentary I would add is “make sure you keep it fun for the youngsters and super-size that creativity.”

The old paradigm — get good grades, go to college, get a job, start a family  — is becoming a luxury for the few.  How much longer are we going to tell this generation that “good” jobs will simply reappear?

As millions of college students graduate straight into the unemployment line this year (two out of three carrying student loan debt, at an average of $26,000) educators, employers and politicians need to ask one themselves one question: How much longer are we going to tell this generation that “good” jobs will simply reappear?

They’ll be waiting for some time — most job openings by 2020 will be in low-wage professions like fast food, retail sales, and truck driving. Last year, 54% of all bachelor’s degree-holders under 25 were either jobless or underemployed. Since 2008, fewer than half of new grads were able to find jobs within a year of graduation — down from 73% before the recession started.

The old paradigm — get good grades, go to college, get a job, start a family — is becoming a luxury for the few. Yet, nostalgically, we still push our young people into this failing system, clinging to hope that the next graduating class will heal itself.  In the 60s and 70s, going to college became the hallmark of American middle-class success — and a surefire ticket to a “real” job. As a result, the number of bachelor’s-degree holders skyrocketed, and it’s now at 30% of the U.S. population. The job market didn’t follow suit, thanks in large part to globalization, automation, and outsourcing.

Given that — and the fact that 40% of young Americans age eight to 24 want to start a business, or already have — we must stop discouraging Millennials from creating their own jobs after graduation (or in some cases, as an alternative to college altogether).

I know what you’re thinking: Starting a business is too “risky.”

While I won’t argue that startups and freelance work are risk-free endeavors, I will say without reservation that, in this new economy, there is just as much — if not more — risk in nonstop job seeking and underemployment. Whereas an entrepreneur’s risk can be mitigated, a full-time job seeker can only wait — and wait.

Not every Millennial will or should become an entrepreneur — but, considering that all net new jobs come from startups, the government, academia and the private sector must do a better job training and supporting those who do, out of necessity, desire, or desperation.

Critics argue that youth entrepreneurship won’t move the needle when it comes to our nation’s financial woes, but that’s a short-term view. If all future high school seniors were educated about the alternatives to “real” employment, from freelancing to franchising, we would eventually increase their chance of success — while spurring job creation, lowering the federal student loan default rate (currently around 9% and climbing) and fueling a needed cultural shift toward self-sufficiency.

Unfortunately, the myth of the safety of the traditional job, instilled in us by the Boomer generation, has set young people back, limiting their choices (and their confidence). So has the misconception that entrepreneurship means changing the world — the “build the next Facebook, or else” mentality. While high-growth tech founders certainly deserve a pat on the back, no one would argue that tech ventures alone are a panacea for youth unemployment.

Just as the immigrant entrepreneurs who built America once did, the key to Gen Y entrepreneurs’ success is in building the next generation of nuts-and-bolts, low-overhead businesses that grow organically over time and eventually create wealth – and, in many cases, jobs. Not Twitter, but moving companies. Not Pinterest, but contracting firms.

For one, it’s time we allowed young veterans to use GI Bill entitlements not only for college, but also for investing in a franchise or business. We can add youth-owned companies to the list of disadvantaged businesses earmarked for prime government contracts. And a common-sense student debt relief and forgiveness program for young entrepreneurs, much like what we already offer public service workers, would have lasting impact on new business creation.

Expanding capital access — through the SBA Microloan Program, or by educating young people about the benefits of crowdfunding capital in the wake of the recently passed JOBS Act — would allow more youth-owned businesses to go from startup to ramp-up. And for the unemployed who wish to start businesses, establishing more state self-employment assistance programs (which leverage the existing federal unemployment insurance program at no added cost) is a no-brainer.

In the classroom, offering entrepreneurship education as early as kindergarten pays dividends far into the future. High schools like New York City’s Academy for Software Engineering serve as models for teaching practical tech skills that both entrepreneurs and employees need to compete.

This is just the beginning of a much larger conversation, of course. But with the class of 2012 about to embark on the same tired path, it’s time to embrace a paradigm shift. America has a long history of entrepreneurial thinkers. If we continue to assess risk by yesterday’s standards and fail to support the Millennials who earnestly want to keep America competitive, we will let only ourselves down.

Next: Sharing in our Success