Welcome to AdVentures!  In this series, we’ll take a closer look at our family’s entrepreneurial venture of the month.  In past months, we’ve hosted a taco wagon, a coffee stand and made and sold homemade chocolate bars.  For August’s event, we were fortunate to partner with a local favorite, Hey Cupcake!, to learn about making great cupcakes.  As with all AdVentures, the goal is to have some fun with the kids and learn more about entrepreneurism.

One of life’s little treats is the cupcake.  And today, the kids and I learned about making these delectable treats from the best of the best…our friends at Hey Cupcake!

In the event you are not familiar with Hey Cupcake!, they are Austin’s biggest and best producer of cupcakes and have five fixed locations in Central Texas.  In addition, they have several Airstream trailers and a truck for catering and special events.

Their menu includes a wide range of options, however, if you’re only able to remember two words from this article…make it Red Velvet (my favorite).

When we arrived at their production facilities our most excellent host, Christina, was ready to go.  We began creating magic almost immediately.

Once the cupcakes were poured, they were off to the oven.  Hey Cupcake! can produce almost 400 cupcakes an hour.  They typically make between 5,000 and 10,000 per week.

While the oven did its work, we enjoyed a tour of the facilities and took a peek inside the vault.

Then it was time to prepare the frosting. 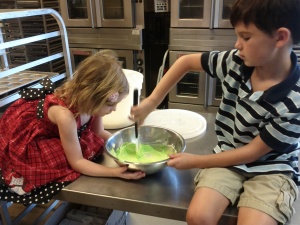 And put on the final touches.

We ended up with about forty miniature cupcakes. 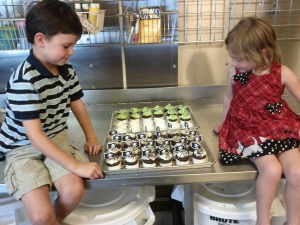 Of which we donated a baker’s dozen to the Ronald McDonald House here in Austin.

And the remainder went to a party.

In terms of fun AdVentures we’ve done as a family, this one literally took the cake.  Christina was such a great host for the event and took the time to explain the entire cupcake making process to us and answered all of our questions.  It will be fun to hear Owen and Malia share this story with others and I’m already anticipating the follow-up questions they’ll be asking us this week.  Thank you Hey Cupcake!

What other AdVentures should we try?  Do you know anything about designing a line of clothes?  Have you ever worked at a hot dog stand?

Next: Why Every School in America Should Teach Entrepreneurship

Previous: 10 Steps to Teaching Your Kids to Become Entrepreneurs

Tags: Adventure, Creative, Family, Fun, Goals, Learning, Sharing
From: AdVentures, The Journey
← 10 Steps to Teaching Your Kids to Become Entrepreneurs
Why Every School in America Should Teach Entrepreneurship →
11 Comments Post a comment